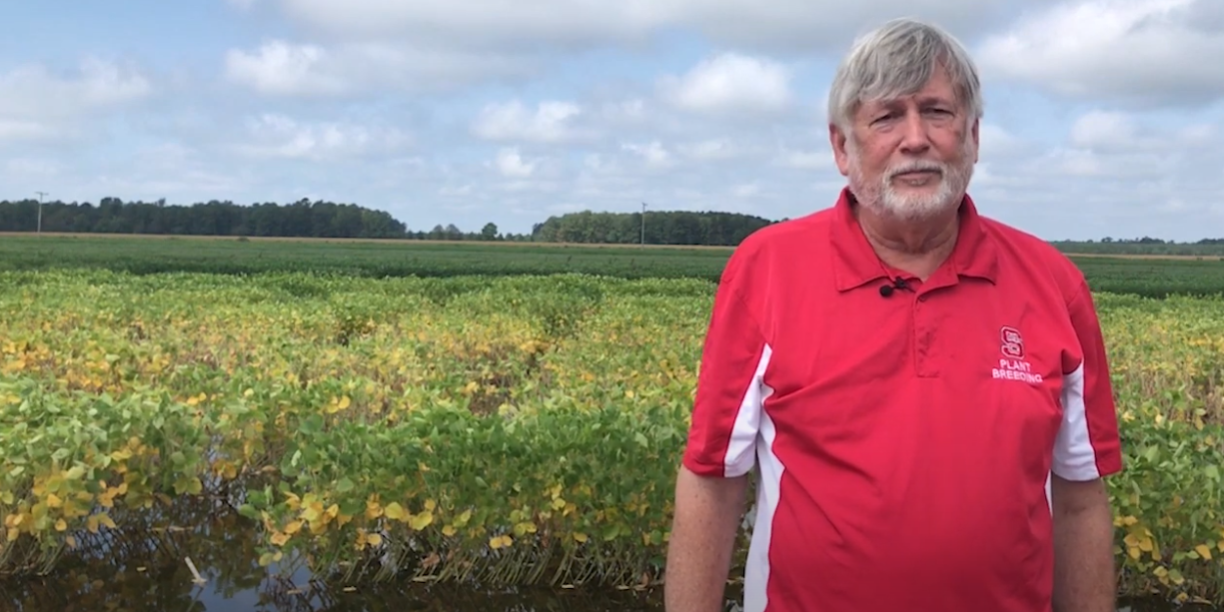 This summer a valued member of the N.C. soybean research team, Dr. Tommy Carter, retired. Dr. Tommy Carter is a soybean breeder at the USDA-ARS’s Soybean and Nitrogen Fixation Unite where he has been the head of the unit since 2011 and the facility’s leading research geneticist since 1981. Dr. Carter has worked tirelessly for 30+ to bring soybean growers the materials they need to continue to increase yield and profitability, specifically in the area of stress tolerance. His work has become synonymous with efforts to increase genetic diversity and improve drought tolerance of soybean varieties in the U.S., and some even refer to him as the “Grandfather of Soybean Drought Genetics”.

Dr. Carter grew up in rural north Georgia as the son of a county Extension Agent and worked in the summers on his uncle’s farm. After high school, he entered the University of Georgia where he majored in agronomy. He obtained a master’s degree in soybean breeding at UGA and then moved to N.C. State University for a Ph.D. in soybean breeding with Dr. Charlie Brim. Dr. Carter joined the USDA Soybean Unit on the NCSU campus in 1981.

Dr. Carter is first and foremost an agriculturalist. His career focus has been to improve agriculture and society by bringing the world’s crop genetic resources to the farmers’ doorstep. Genetic bottlenecks are a serious problem in U.S. soybean breeding programs, and Dr. Carter demonstrated their severity through a series of experiments in North Carolina. An important aspect of genetic diversity is drought tolerance. Dr. Carter has led a national program (including as many as 20 scientists) for 20 years to develop drought-tolerant soybean cultivars, using germplasm from Asia as parental stock. The original and subsequent drought-tolerant germplasm discoveries by Carter and project members have been the basis for almost all drought-tolerance advances in U.S. soybeans. He identified the first drought-tolerant soybean types and reported the first QTLs (genes) for aluminum, salt, and drought tolerance in soybean. He transferred more than 100 tolerant breeding lines to the industry via Materials Transfer Agreements (MTAs). He released the first drought-resistant soybean variety, USDA-N8002.

Dr. Carter is leaving the USDA-ARS unit in good hands with his replacement, Dr. Ben Fallen. Dr. Fallen grew up on a tobacco farm in Halifax, V.A., and comes to the Nitrogen Fixation Unit from Clemson where he led their soybean breeding and genetics program. We are looking forward to working with Dr. Fallen and wish Dr. Carter all the best in his retirement! As a way to say “thank you” to Dr. Carter for all his contributions, we have compiled the video below. We are incredibly grateful for all the time and energy he has put into breeding better varieties for soybean growers. While we are sad to see him leave, we are excited for him to have more time with his grandchildren and wife.