Executive Order No. 100 and Transportation Waivers for Hurricane Dorian 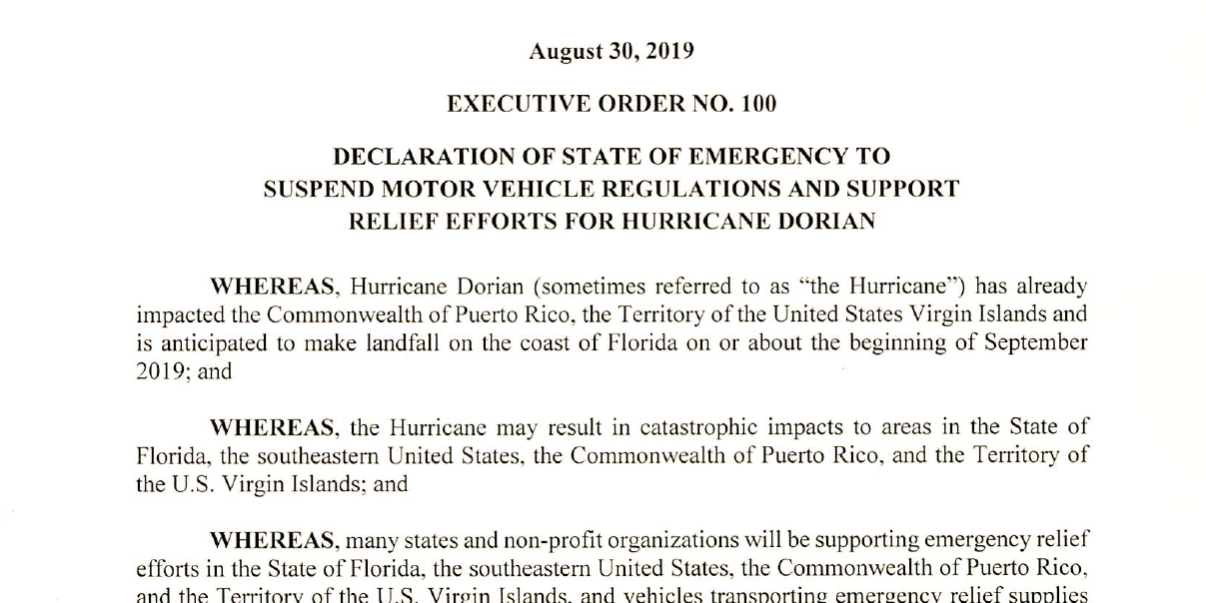 Governor Cooper has declared a State of Emergency for NC and issued Executive Order No. 100 in light of the approaching Hurricane which is expected to make landfall in the Bahamas and Florida early next week. The order includes transportation waivers suspending the weighing of vehicles transporting agricultural products and livestock as well and lifting the maximum number of hours for truck drivers.

RE: TEMPORARY SUSPENSION OF MOTOR VEHICLE REGULATIONS Due to the approach and potential impacts of Hurricane Dorian, the Governor has declared a State of Emergency for North Carolina.  Hurricane Dorian creates an imminent threat of severe economic loss of livestock, poultry and crops ready to be harvested.  At my recommendation and pursuant to N.C. Gen. Stat. § 166A-19.70(g), the Governor has directed the Department of Public Safety to temporarily suspend weighing those vehicles used to transport livestock, poultry or crops ready to be harvested.  The Governor has also declared that the maximum hours of service for drivers prescribed by N.C. Gen. Stat. § 20-381 should be waived.
A copy of Executive Order No. 100 is attached.  Please share these executive orders with members of your commodity groups.  If anyone is mistakenly stopped while trying to transport livestock, poultry, crops or feed, they should share the Executive Order with law enforcement.  Specifically, Section 9 of Executive Order No. 100 states “Upon request by law enforcement officers, exempted vehicles must produce documentation sufficient to establish their loads are being used for … carrying feed for livestock and poultry, or transporting livestock, poultry or crops ready to be harvested in the State of North Carolina.”