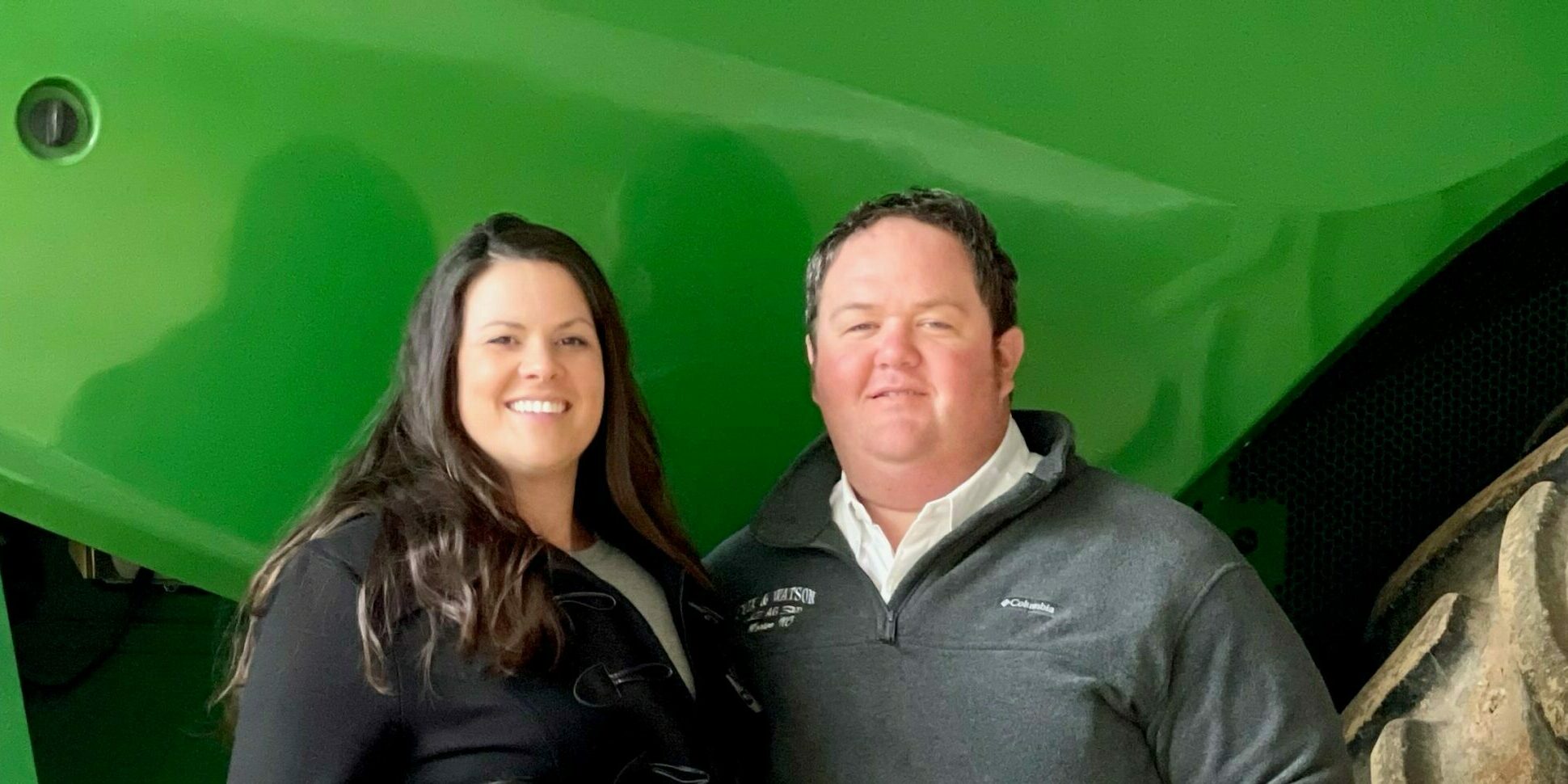 Logan & Kristin Watson of Monroe, N.C., have been selected as North Carolina’s ASA Corteva Agriscience Young Leaders for 2021. This is the 38th year that the N.C. Soybean Producers Association has participated in the program that identifies and recognizes prospective agricultural leaders from the state.

Logan graduated from N.C. State University in 2009 with Associates Degrees in Ag Business Management, Livestock and Poultry, and Field Crops Technology. After graduation, he returned to his family’s farm, Cox and Watson Ag, where he has been working since he was old enough to follow his grandfather around. Kristin attended Carolinas Healthcare College and now works as a Surgical Technologist at Atrium Health Union Hospital. In addition to her medical career, Kristin helps on the farm by delivering parts, filling whatever role is needed, and most importantly, raising the next generation. Logan has also served on the NCSPA Board of Directors since 2015, Union County Farm Bureau, Union County Ag Advisory Board, and is a 2014 graduate of the N.C. Tobacco Trust Fund Agriculture Leadership Development Program.

Precision technology has been one of the most useful tools on their farm in recent years where they raise wheat, corn, turkeys, and 3600 acres of soybeans. Logan’s favorite things about farming are the new challenges, being able to see a product grow from start to finish, and the teamwork on his farm. Looking towards the future, he thinks that for the next generation there will be a greater emphasis on where food comes from which will create a closer relationship between the consumer and the farmer. “Embrace Solutions Not Excuses” is a quote that reflects Watson’s philosophy of life.

An important part of being on the NCSPA Board of Directors for Watson is being able to work with growers across the state while advocating for trade and markets. Something that he would want consumers to know is, “farmers are the original conservationists, nobody has greater pride and care for the environment, crops, and animals than the American farmer.” Watson also states that his top agricultural priorities are creating and protecting markets for products, educating the public on farming practices, and farmers being efficient with their operations.

The Watsons have been married for 6 years and have two boys, John Logan, 5, and Pate Stanley, 4. When they are not farming, they like to make time for family, being at the lake, fishing, hunting,  and cheering on N.C. State and their favorite NASCAR drivers. Scheduled to originally begin in November 2020, this year’s program was put on hold due to COVID-19. The group was finally able to kick off their program at the July American Soybean Association Meeting in Vancouver, Washington. The 2021 Corteva Young Leader Class will continue their training in November in Johnston, Iowa.