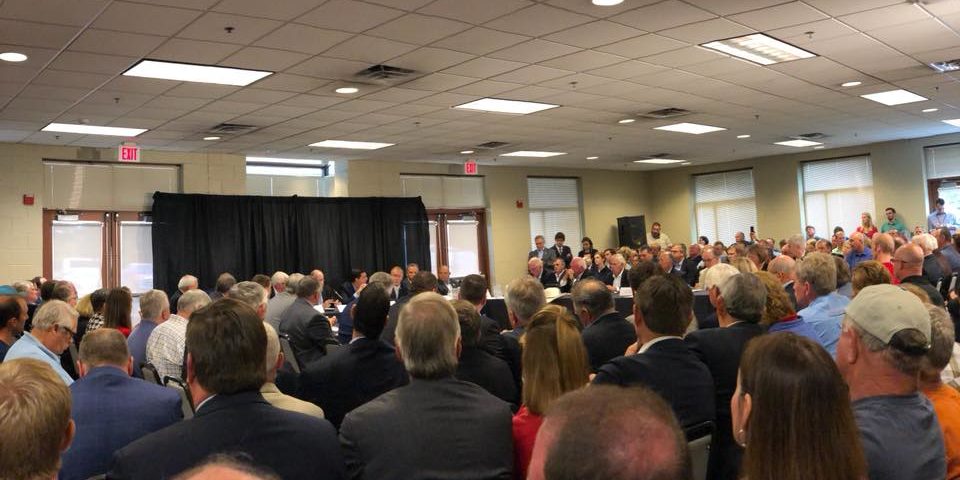 Friday, August 3rd, leaders from across NC and the country gathered to discuss the future of agriculture on a national scale. The conversation was organized by Congressman David Rouzer and Senator Thom Tillis in light of the recent nuisance lawsuits that are targeting eastern NC hog farmers. The roundtable was held at the NC State Fairgrounds in the Martin Building, and with a crowd of 1,000 farmers, the overflow watched from the Scott Building.

Six NCSPA directors made the trip to Raleigh that day to show their support on the issue. NC’s American Soybean Association representative, Jimmy Thomas was one among the many national commodity leaders invited to be a part of the conversation.  President of American Farm Bureau Federation, Zippy Duvall commented on the issue saying “There is animal production in every state across America, and all those family farms are buying grain that is produced in every state across America. All of agriculture is being threatened by these nuisance lawsuits.”  The roundtable included the following leaders:

Overall, it was an inspiring and uplifting day spent hearing from ag leaders from the state and across the nation. Some of these guys traveled halfway across the country to stand strong with our farmers and livestock producers. The group later held a press conference answering questions on the lawsuits and agricultural practices here in NC, setting the record straight. Commissioner Troxler summed up the meeting best when he said, “We can feed the world, but we have to be on the farm to do it.”

Below is the full video from the roundtable discussion.