Soybeans on the Hill 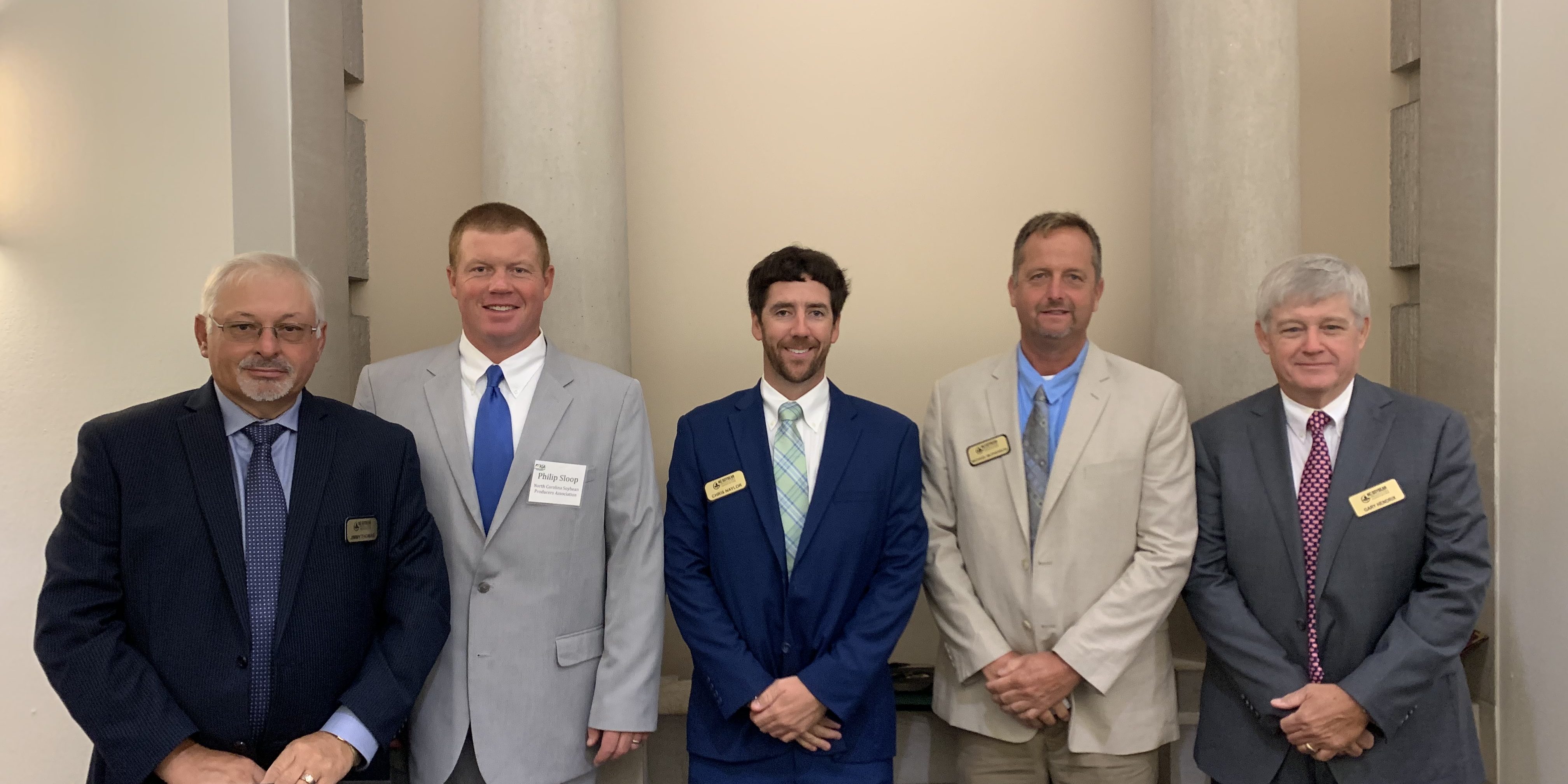 Five growers from NC made the trip to Washington, DC this week to spend time with the state’s Representatives and Senators. The trip was a part of the American Soybean Association’s summer board meeting that included a day of Capitol Hill visits. NC’s ASA Representative Jimmy Thomas, NCSPA Secretary Gary Hendrix, NC SoyPAC Chair Michael McPherson, and NCSPA Executive Committee Directors Chris Naylor and Philip Sloop all made the trip up during one of the busiest times of the year to make sure that the voices of the farmers were being heard.

The group was able to sit down with most of NC’s congressional offices and both Congressman David Rouzer and Congressman Richard Hudson took time to speak with the group. In addition, NC Soybeans also sat down with staff from Senator Burr and Senator Tillis as well as Rep. Meadows, Rep. Foxx, Rep. Walker, Rep. Holding, Rep. Butterfield, Rep. McHenry, and Rep. Price. Passage of the United States Mexico Canada Agreement took the lead of the meetings and all the representatives from both sides of the isle assured us that they support the agreement and know the importance of it to the state.

Another trade-related topic that the group relayed was the funding level for the Market Access Program and the Foreign Market Development Program. Since 2001 & 2006 FMD and MAP, respectively, have not seen an increase in funding levels. Given the current trade environment, it reemphasized the importance of these programs continuous support, not just when markets change. The farmers also stressed the need for labor reform within the guest worker programs. Though they were appreciative to see efforts from the administration by the newly released rules the previous week, the adverse wage rate continues to rise making it difficult for farms to be efficient. Additional funding for the USDA’s Soybean & Nitrogen Fixation Unit in Raleigh was another topic discussed. The unit is a unique soybean research location, considering that it can test all the extremes and ensuring that the location has the resources that it needs will help keep the southeast competitive in soybean production. The group ended each visit by showing their gratitude to the offices and Congressmen for their work on the Federal Disaster Aid; farmers at home were in great need of it and now they can look forward to rebuilding.

NC Soybeans ended the day with a visit to USDA and meeting with Under Secretary Northey. As the Under Secretary of Farm Production & Conservation, Northey talked to the NC group about the second round of Market Facilitation Payments and when they could expect the county rates to be released (they were released the following morning). He also shared that the sign-up process would ideally be the same and that it would be administered by the Farm Service Agency. Under Secretary Northey also spoke on the Federal Disaster Aid and when details could be expected on that program. The group wrapped up the meeting by again stressing the key issues from the state including labor and the MAP & FMD funding levels.

The following morning, during the Soy Issues Forum portion of the ASA meeting, North Carolina Pork Council CEO, Andy Curliss, presented to soybean growers and state staff from across the country on the nuisance lawsuits that were currently targeting NC hog farms. The attendees were surprised to see the details of the cases and to learn how it could soon affect them in their home state.

Our state is very fortunate to have farmers who are passionate about agriculture and continue to advocate for their peers back at home, even when that means work will halt for a few days. It is important to continue these efforts on the federal and state level to make sure that your voice is heard and that ag is well represented.

Visits to Washington D.C. and other advocacy efforts made by the association are possible through your membership in the NC Soy Alliance. Membership dues go towards policy and advocacy efforts in the interest of NC farmers and the agricultural community. Not a member of the NC Soy Alliance? Then sign up online at www.ncsoy.org//soy-alliance to help soybean growers in NC continue to represent you.

There is no gallery selected or the gallery was deleted.