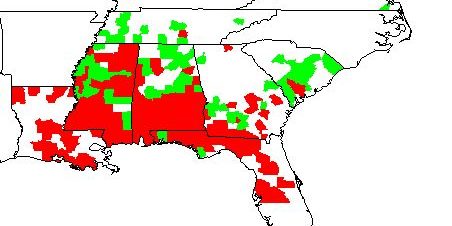 Tropical Storm Hermine may well have blown some rust spores into North Carolina last weekend.  If it did, and if the spores landed on wet soybeans, we may well have rust show up in a couple of weeks.  Folks who are scouting soybeans then should be alert for signs of rust, especially on the back side of leaves in the lower part of the soybean canopy.  If the scout cannot rule out rust, (s)he should contact his/her county Extension agent, consultant, or dealer, to see if (s)he can rule out rust.  If (s)he cannot rule out rust, a plant sample should be sent to the Plant Disease and Insect Clinic on NCSU campus.  If possible, the sender should note the exact coordinates of where the suspected rust was found.

We still consider our earlier recommendation to not spray soybeans that have not started blooming, or blooming soybeans that are more than 100 miles from confirmed presence of rust on soybeans to be a valid recommendation for most soybeans in NC.  We do not recommend spraying for rust after stage R6 (full-sized beans in the top four nodes) since soybeans this mature will probably drop their leaves naturally before rust will cause many to drop prematurely.   Check the label on the fungicide you prefer to use to see how late in the season that chemical may be sprayed.