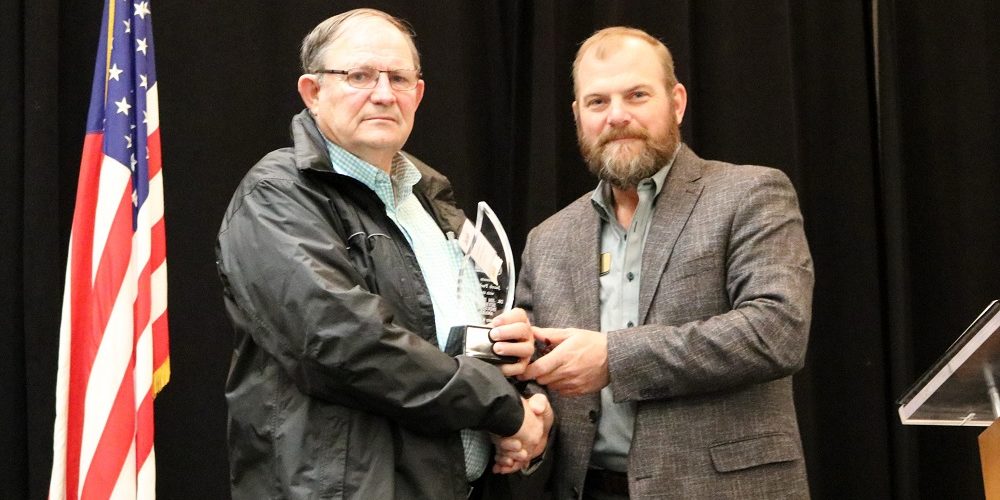 During the NC Commodities Conference, two NC soybean growers were awarded for their service and dedication to the association and the industry throughout their board tenure.

Jacob Parker was awarded the third annual Dr. Jim Dunphy Industry Award after serving on the NC Soybean Producer’s Association board for over 20 years. Starting as a state level director in 1999, his leadership skills and vision for the association also lead him to roles on the Executive Committee, all officer positions including President of the association and most recently finished his 9-years of service on the United Soybean Board. Parker was also very involved with the Research Committee and served as chair while helping to pave the path for the association’s current research program. Parker even continued his service when trails in his life seemed more than he could handle. There was never a question of his love for the agriculture community and his desire to serve it and continuously improve it for the future generations. These reasons and more are why NCSPA’s Board of Directors felt that Parker was more than deserving of the highest award that the association presents. While it can not justify all the work that he has done for the NC soybean industry of the years, we hope it shows the true form of our gratitude for his service.

Chris Naylor was also awarded during the NC Commodities Conference with the annual NC Soybean Producers Meritorious Award. Naylor had been a part of the NCSPA board since 2014 and a part of the executive committee since 2017. He spent much of his time dedicated to the policy and advocacy side of the association and served as chair of the Advocacy Committee for the last two years. Naylor knew the importance of working with NC’s state and federal elected officials and made the commitment to making multiple Capitol Hill and Congressional visits each year. He was also instrumental in the association’s fundraising efforts, building relationship with corporate partners and fundraising for the NC SoyPAC. The board was in great appreciation of the years of hard work that Naylor dedicated for NC’s soybean farmers and knows that he will continue to be a great voice and advocate for the agriculture community down the road.