Interest in Soybean Exports Picks Up at the Port of Wilmington 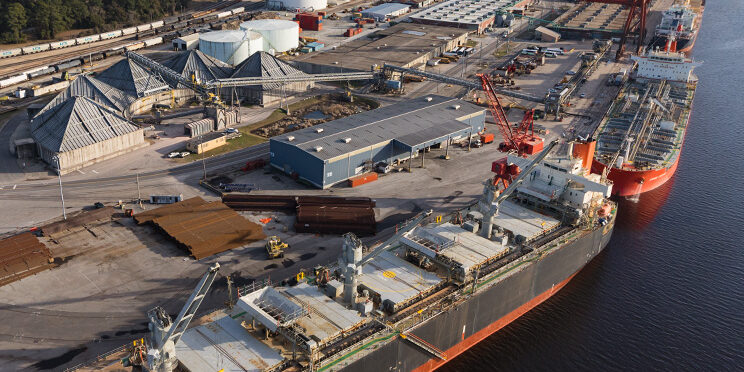 The last several months have ushered in some exciting developments for North Carolina soybean exports. In January, Scoular announced they would be building a high-speed container loading facility at Wilmington, a reflection of the compelling economics of containerized exports from NC, and the culmination of a series of meetings and conversations between the Nebraska-based company and the NCSPA. For their part, Scoular has signed a ten year lease, signaling an investment north of one million dollars with an anticipated completion date  of July 1st. The presence of a new, committed buyer in the state undoubtedly is a “win” for North Carolina farmers.

In a typical year, North Carolina exports between 5 and 15% of the its soybean crop, primarily through the ports of Norfolk, Wilmington and Charleston, almost all of which leaves in a container. Consistent with the national soybean sector and reflective of the trade war with China, these exports fell markedly in the 2018 and 2019 crop year. 2020 has seen a resurgence in export demand, however, as other primary exporters, most notably, Brazil are tapped out of soybeans until the arrival of their new crop in March.

While the pace of total NC soybean exports lags the record highs experienced in 2013/14, the pace of exports at Wilmington continues to advance. At 390,000 bushels, December soybean shipments from Wilmington set a new record and NCDA sent an inspector to the port in November for the first time in several years. The move was needed to accommodate the brisk business Smithfield has done in filling containers at the port with mobile conveyors (pictured), a capability they purportedly hope to turn into a more permanent fixture tied in to their existing grain warehouse. While Cargill will continue to be the largest buyer in the state, crushing beans for the state’s livestock sector, exports have a proven ability to be “the tail that wags the dog” – a smaller segment but one that can lift prices for the broader market.