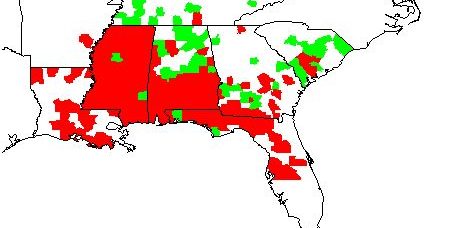 Although Asiatic Soybean Rust may be moving up the Mississippi River valley pretty rapidly, it seems to be moving more slowly up the east coast.  This week, rust was confirmed in Arkansas County, AR, Caldwell County, KY, and Williamson County, IL, all for the first time this year in those 3 states.  The closest to most of our NC soybeans so far have been in Colleton County, SC (confirmed on Aug. 19), then Bamberg County, SC (one county closer) on Sep 14, then in Orangeburg County, SC (another county closer), on Sep. 22.  The Orangeburg County find is approximately 120 miles from Charlotte, 325 miles from Elizabeth City, 160 miles from Fayetteville, 200 miles from Raleigh, and 260 miles from Washington, NC, and is the closest find to those cities to date.  The closest rust to Murphy remains Union County, GA, at 10 miles; to Wilmington remains Colleton County, SC, at 180 miles; and to Winston-Salem remains Bamberg County, SC at 205 miles.

Tropical Storm Hermine may well have blown some rust spores into North Carolina when it came through.   If it did, and if the spores landed on wet soybeans, we may well have rust show up anytime.  Folks who are scouting soybeans should be alert for signs of rust, especially on the back side of leaves in the lower part of the soybean canopy.  If the scout cannot rule out rust, (s)he should contact his/her county Extension agent, consultant, or dealer, to see if (s)he can rule out rust.  If (s)he cannot rule out rust, a plant sample should be sent to the Plant Disease and Insect Clinic on NCSU campus.  If possible, the sender should note the exact coordinates of where the suspected rust was found.

We still consider our earlier recommendation to not spray blooming soybeans that are more than 100 miles from confirmed presence of rust on soybeans to be a valid recommendation for most soybeans in NC.  We do not recommend spraying for rust after stage R6 (full-sized beans in the top four nodes), since soybeans this mature will probably drop their leaves naturally before rust will cause many to drop prematurely.   This means we consider many of our state’s soybeans to be safe from economic damage from rust this year.  Check the label on the fungicide you prefer to use to see how late in the season that chemical may be sprayed.