Although 2016 brought some rough weather to many parts of the state, with extreme drought in much of the Piedmont and hurricanes and flooding in the east, some impressive yields still showed up. Based on the latest NCDA statistics, the statewide average yield was 35 bushels/acre, up from 32 bushels/acre last year. And although acreage was down from last year (1.66 million acres in 2016 versus 1.73 million acres in 2015), total production was actually up 5% to 58.1 million bushels. 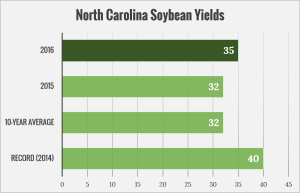 Some of the highest yields in the state came from well managed no-till fields in the Piedmont that got an extra shower or two or from fields in the Blacklands that were at a little higher elevation and didn’t go underwater during the excessive rains.

In addition to decent yields across the state, several growers topped 70 bushels/acre. Last week, at the North Carolina Commodities Conference, the state soybean yield contest winners were announced. While we didn’t break any state records or hit 100 bushels this year, some impressive yields showed up in the 27 counties in this year’s contest.

There is also a contest for Most Efficient Soybean Production. The winners are in the table below.

Looking at the production practices of these top yielding growers, a few things stick out that may be helpful to all growers for increasing their soybean yields.

Keep these points in mind as you plan for 2017. We would love to see statewide yields back to our 2014 record of 40 bu/acre but in order to increase yields across the state, growers must be willing to focus on increased agronomic management of the crop. We are also still waiting for an NC grower to break 100-bushel beans. Remember there is a $2,500 prize for the first grower to do this (or the highest yield over 100 bu if multiple growers surpass 100 bu in the same year) and if you’re an NC Soy Alliance member we’ll double it to $5,000)!