This week we continue with our management decisions series. Thus far we’ve discussed weed management and seeding rates. If you missed it, catch up here and here. 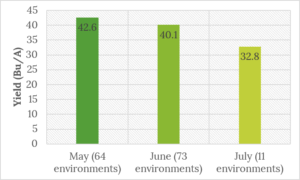 But the question is how early can we plant and what maturity groups should we be planting at these early dates?

In North Carolina, planting soybeans in mid-March is pretty risky as our average last frost date is not until mid-April but there may be the potential to increase yield by planting IV’s or V’s in late April to early May. As you can see below, much of Eastern North Carolina is clear of frost by the middle of April, so an early May planting could be a fairly safe bet. 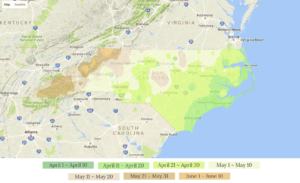 Well, our longest day occurs on the summer solstice, June 21. Agronomists that have worked with this Early Soybean Production System suggest having soybeans at R1 to R3 near the longest day of the year so they are capturing the greatest amount of light when it is needed the most – for setting and filling pods.

As part of a research project we conducted in 2017, we recorded dates that variety by planting date treatment reached R1, R3, and maturity. The trends were very similar for each location and for all varieties at a given maturity group, so the data presented below is compiled across all locations.

The graph below is the average time between different growth stages for the different maturity groups (late 4, early 5, late 5) and planting dates (mid-April, mid-May, mid-June) tested. At the bottom, the number of hours of daylight for each day is shown in the light green arch. These intervals are averages and will vary some from year to year and environment to environment.

The green vertical line on the graph is at about June 21. If our goal is to get between R1 – R3 by June 21, really our best option in NC is a late April to early May planting of a group 4 or early group 5 variety.

Here’s another way to look at the same data. You’ll notice that the later the maturity group, the more days the variety spends in vegetative growth. Also, as planting date gets later, the time spent in the vegetative stages decreases.

Now, I’m not suggesting you go and plant all your acres with a group IV in late April because there are many other factors to consider. One of the most important being will you have time to cut beans when they reach maturity? Most of the earlier maturing varieties will not hold long in the field and you must be ready to go when they are.

When making planting date decisions for your operation, it’s important to remember that this is not a one size fits all decision and what works well on one farm may not work on another. But if you think an early planting date may work on your operation, I would suggest you try it out on a small portion of your acres.