Influence of Planting Date and Maturity Group on Yield – Part 2

Last week we started discussing data from some planting date by maturity group research that the North Carolina Soybean Producers Association sponsored, and a group of crop consultants carried out. If you missed that post, catch up here.

As a quick reminder, 8 different varieties (four late 4’s, two early 5’s, and two late 5’s) were evaluated at three different planting dates – early (mid to late-April), mid (mid-May), and late (mid-June). The first part of our analysis included combining all data across our locations and looking at overall trends. We saw a strong yield increase when planting early compared to planting late (on average a 7.2 bu/ac difference). 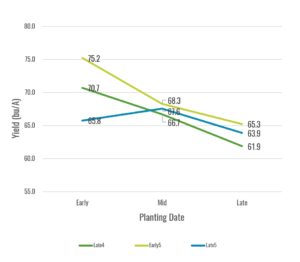 This week we are breaking our data down by location and looking at the effects both planting date and maturity group have at the locations tested. Below are plots that show yield of our varieties and planting dates at each location. 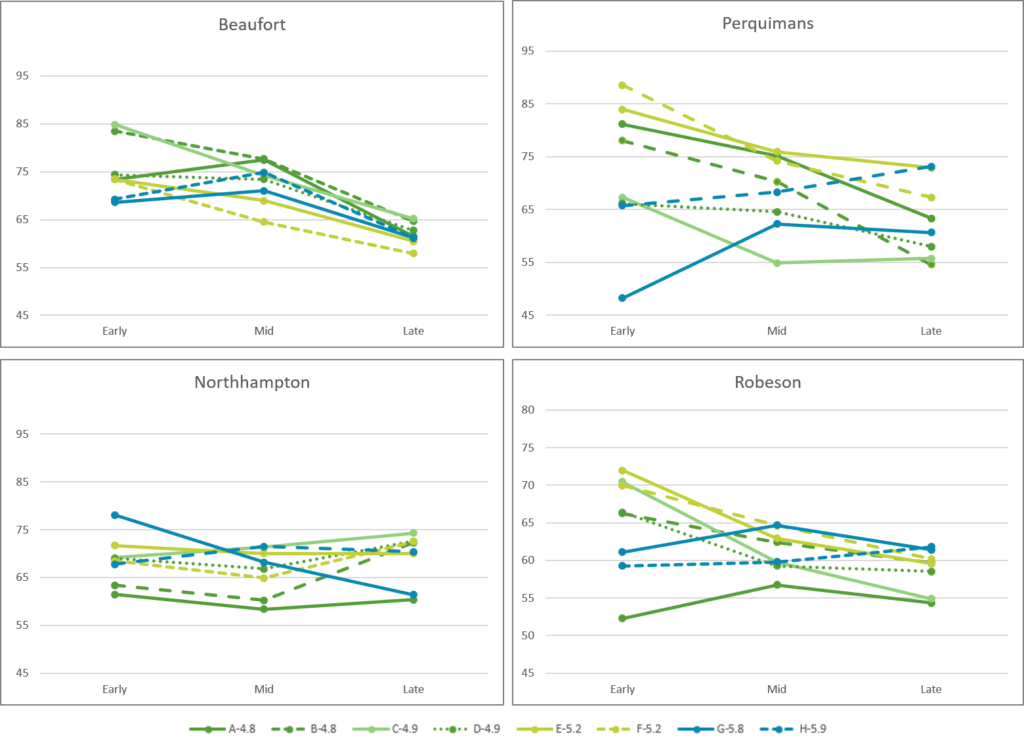 While we saw a strong correlation between yield and planting date when we combined data from all locations, if we look at individual locations, especially those in the Coastal Plain region, that correlation isn’t nearly as strong.  This data demonstrates perfectly that there is no “one size fits all” approach to selecting maturity groups and planting dates for NC soybean growers.

What works on one farm will likely not work on the next. In addition to yield, there are a number of other factors to consider when deciding on planting dates for your operation. One of the most important being will you have enough time to cut these beans when they reach maturity. In this test, the early planted beans reached maturity in the middle to late-September. Earlier maturing varieties will not hold long in the field and you must be ready to harvest when they are. For many of our Coastal Plain growers, their priority in September is on getting tobacco and sweet potatoes out of the field, not picking beans.

However, if you do think you will have (or can make) time, transitioning a portion of your acres to an earlier planting date may be something to consider. One advantage of this is risk mitigation. If you stagger planting dates you may miss drought, heavy rain events or hurricanes on one group that hit another. You also spread out your harvest window. If you think an early planting date may work on your operation, I would suggest you try it out on a small portion of your acres.

Check back next week as we continue to look at data from this research, specifically how day length and temperature play a role in this maturity group by planting date system.