If you farm in North Carolina, you know nematodes are a fact of life regardless of what crops you grow. So what exactly is a nematode? Nematodes are tiny, colorless, threadlike, unsegmented roundworms. Nematodes can be found all over the earth and 4 out of 5 creatures on the planet are actually nematodes. There are a few types of nematodes that attack animals (like hookworms, roundworms, and pinworms). Most, however, live in the soil and are too small to be easily seen with the naked eye. A few of these cause economic damage to plants and are referred to as plant-parasitic nematodes (PPN).

Plant parasitic nematodes that can cause economic loss to NC crops include lance, dagger, reniform, ring, lesion, soybean cyst nematode (of which there are many different races), and root-knot nematode (we commonly have had 3 species: southern, northern, and peanut, but recently a new species called M. enterlobii was found in 5 NC counties).

Historically, soybean cyst nematode (SCN) and root-knot nematode (RKN) cause the most damage on soybeans. Sting, lance, lesion, and reniform are also a concern for soybeans and can cause some economic loss, but that happens less frequently.

Plant parasitic nematodes feed on crop roots while directly and/or indirectly damaging plant health and potentially reducing yield. The roots of soybeans are often damaged by these common PPNs without resulting in any obvious above ground symptoms. Although many growers do not realize it, nematodes are probably the most serious disease problem for North Carolina soybeans and may be reducing yield by as much as 7-8%.

Nematodes reproduce by eggs and their life cycles can be as short as 18-21 days in warm soils. This means a small population multiplies very quickly under that right conditions and with the right food source. A typical nematode moves no more than a 1-2 feet during its life but they are easily spread by soil carried on equipment, feet, or water runoff.

Symptoms of RKN include areas of depressed growth with non-uniform stunting of plants. Severely infected plants may be chlorotic. Symptoms of SCN include irregular patches of stunted and/or yellow soybeans and an up-and-down growth pattern. In many cases, nematode damage is blamed on some other problem, as nematodes make the plant more susceptible to disease, nutrient deficiencies, and drought. 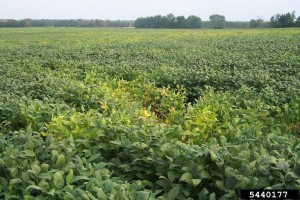 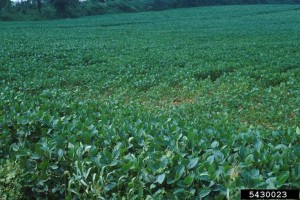 Nematodes have traditionally been recognized as a major problem in Eastern NC where the preferred sandier soil types dominate crop acreage, but a recent study sponsored by the NC Soybean Producers Association and conducted by NC Cooperative Extension Agents in the Piedmont found a wide diversity of PPNs in Piedmont row crop fields. 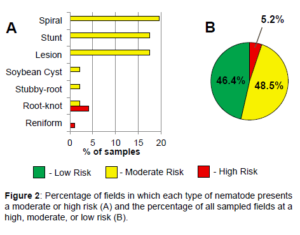 Ninety-seven row crop fields were sampled across seven Piedmont counties. They found that 54% of the fields had PPN densities at a level that would lead to a high to moderate risk for soybean yield damage. While most fields contained high levels of spiral and stunt nematodes, RKN and SCN were also a concern.

This study demonstrated that PPNs may be a bigger problem for our Piedmont growers than was originally thought and helps shine a light on the potential impacts and damage that PPN may be causing on soybeans in the Piedmont.

So if you have (or think you may have PPNs), what are the best management practices for dealing with these in soybeans?