Last week we discussed some basics of soybean fertility (catch up here if you missed it). We know how important sufficient levels of P and K are but do soybeans need N upfront or in-season?

Unlike most of our other crops soybeans have the ability to obtain their own nitrogen through N fixation. N fixation is the process by which the soil bacteria, Bradyrhizobium, form an intricate relationship with soybean plants. The bacteria obtain sugars from the soybean and in return, the soybean plant obtains N from the bacteria.

Because soybeans have the ability to fix their own N farmers have typically taken a “hands-off” approach to N fertilization. But the production of high-yield soybeans has stimulated an interest in the application of N to soybeans recently.

There is some evidence that high-yielding soybeans (>60 bu/ac) may benefit from supplemental N applications because N fixation may not be adequate to meet crop needs at these higher yields. A 2008 review of soybean fertility (data compiled from 100 research studies) compared the N-demand of high yielding soybeans to the capacity of soybeans to fix N from the air and obtain it from the soil (Salvagiotti et al., 2008). 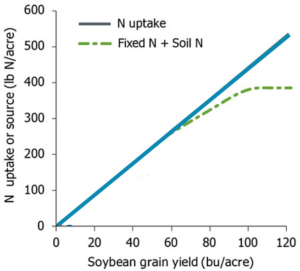 Soybeans without supplemental N applications obtain their N from 2 sources: N fixation and soil N (residual N and mineralization of organic matter). As seen from the blue line in the chart above, grain yield increases proportionally compared to N uptake. Almost 500 lbs N uptake per acre are required to produce 100-bushel soybeans. But, soybean’s upper limit for N fixation is considered to be only about 300 lbs/ac. So this suggests that in environments where high yields (above 60 bu/ac) are expected, the addition of N at some point in the season may help increase yields.

On the other hand, the application of supplemental N can cause the soybeans to “get lazy” since it is easier for the plant to take up supplemental N than it is to sustain the symbiotic relationship with the Bradyrhizobium. It is unclear if and when soybeans will respond to N fertilizer as much of the research has produced inconsistent results.

To help begin to answer these questions for North Carolina growers, the NCSPA has sponsored a few different N application tests. Results from some of these are reviewed below.

To determine which factors are most important for maximizing soybean yields, Dr. Jim Dunphy established a “Cadillac” maximum yield treatment study. One treatment included many different inputs while other treatments consisted of subtracting one input at a time to determine the effect of that factor in a high yielding system (See results from year 1 of that study here). 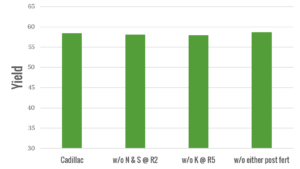 Based on data collected from 7 environments in 2015 and 2016, the subtraction of either or both in season applications didn’t cause a significant reduction in yield. One reason for this may be because these tests were located on sites with productive soils that already had adequate fertility. Also, as seen in the first chart, we wouldn’t expect yields below 60 bu/ac to benefit from the addition of supplemental N and our maximum average yield here was about 58 bu/ac. In sites with lower residual soil N or in sites where the yields reached 80+ bu/ac we may have a seen a larger difference.

Some data suggests that the application of 30-50 lbs of N per acre could give a yield bump. To test this claim, a group of NC Crop Consultants evaluated applications of AMS (150 lbs/ac), urea (70 lbs/ac), and ProGyp (200 lbs/ac) at pre-plant, V8-R1, or a split application between the two. 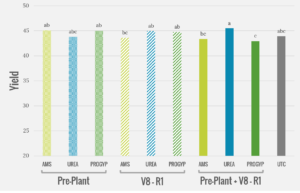 Based on results from 5 locations in 2016, none of the products tested at either application time resulted in a significant increase in yield, when compared to the untreated check. While some products did give a numerical yield boost at certain timings, we saw no consistent benefit from a single product or from a single application time (see below).

In these tests, like many others conducted over the last few years, we saw little response to supplemental N. This was likely because yields were restricted below 60 bu/ac by factors other than limiting N (disease, nematodes, weather, etc.).

The application of supplemental N might provide a yield benefit for soybeans in high yielding environments, but only where you expect to see yields above 60 bu/ac. In areas where your expected yields are below 60 bu/ac, you are probably better off skipping the N application and investing that money elsewhere (maybe a good inoculant or other seed treatment).

If you are interested in testing supplemental N on your on farm, strip trials are a good way to do this. You could try a low rate of N in alternate strips to determine if an addition provides a yield increase or is cost effective. Tips for conducting strip trials are below. 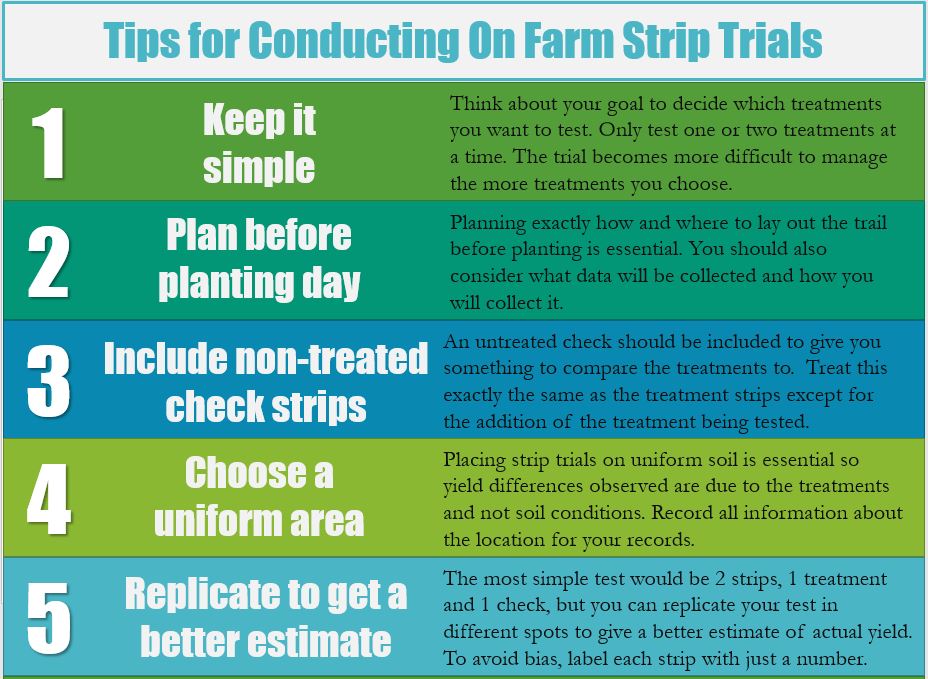 And as always, with the addition of any product, you must also ask yourself will it be cost effective? Even in cases where yield increases are observed, you want to make sure that increase covers the cost of the product.