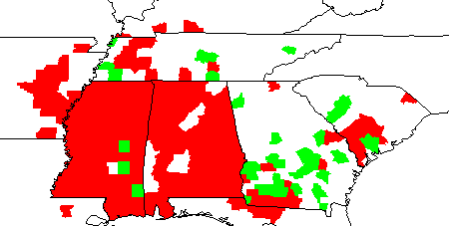 While it is far enough along in the season to not be concerned about rust for the majority of our soybeans in North Carolina, some very late planted beans may still be at risk.

Read the rust update below from Drs. Jim Dunphy and Lindsey Thiesen if you have beans that haven’t reached R5 yet.

Asiatic Soybean Rust (ASR) has been confirmed closer to most of our NC soybeans this week, with detections in Jasper and Dillon counties, SC.  Dillon County is just across the state line from Lumberton and Laurinburg, NC.  Rust was detected on 2 out of 100 leaves, with one small cluster of pustules on each of the two leaves.

We recommend spraying a fungicide to prevent infection of ASR on soybeans if ASR is confirmed on soybeans within 100 miles of your field, and the soybeans are between first bloom and stage R5 (early seed development).   By the time soybeans reach stage R6 (full sized beans in a pod on one of the top four nodes), they will typically lose all their leaves normally before rust detected now has time to defoliate them earlier, so rust no longer has the potential to cause economic damage.