With greater than 80% of the soybean acreage in North Carolina setting pods, now is the time to be on the lookout for pod feeding insects. Pod feeders are the most dangerous insect pest as they directly attack soybean yield by feeding on the seeds/pods. Corn earworm and stink bugs are the two most serious insect threats to NC soybean growers.

Two different methods can be used to sample for both of these pod feeders and the method used is dependent on the row width. For rows greater than 30 inches a shake cloth (or beat cloth) can be used. A shake cloth is simply a 3-foot x 3-foot piece of cloth that is placed between two rows. Plants on both sides of the 3-foot cloth are struck downward with the forearm (or a stick) to dislodge insects onto the sheet. Corn earworms or stink bugs that land on the sheet should be counted. Average the number of each over the samples taken. 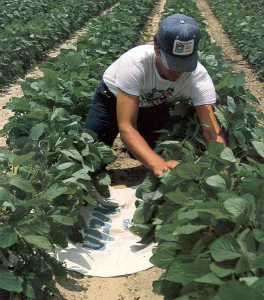 For rows less than 30 inches it is more practical to use a sweep net. Sweeps are made by rapidly sweeping the net downward in an arc about 3 feet and perpendicular to the plant rows. Sweeps should penetrate about 15 inches deep into the foliage. Sweeps should be vigorous enough to dislodge the insects and if done properly, the sample will contain some leaves. A complete sample consists of 15 separate sweeps done continuously while walking down the row. Once the sample is complete, count the number of corn earworms and stink bugs in the net. Average the number of each over the samples taken. 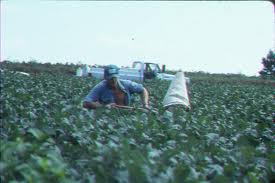 Corn earworm may feed on soybean foliage, flowers, or pods, but the most serious yield losses occur when large corn earworm larvae feed on almost mature soybean seed. Thresholds for corn earworm depend on row width, price of beans, price of treatment, and sampling method used. This online calculator is useful for determining if an insecticide is needed. Pyrethroids have most commonly been used to control corn earworm but, there is evidence we have more resistance to pyrethroids than normal this year. There have been some reports of pyrethroid spray failures across the state and moths in Georgia and Virginia have tested more resistant to pyrethroids than normal. While pyrethroids will work well in many areas, if you are worried about pyrethroid resistance or have noticed spray failures, a worm-specific material like Blackhawk, Intrepid Edge, Prevathon, or Steward would an option. 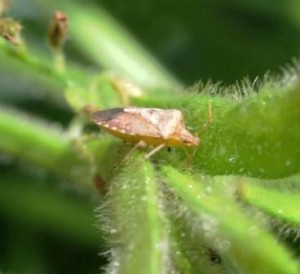 Stink bugs infestations typically occur later than corn earworm, from late August to early October. Stink bugs feed on tender terminals, blooms, pods, and developing seeds with their piercing mouth parts. Thresholds for stink bugs are based on row width, price of beans, and sampling method used. This online calculator is useful for determining if an insecticide is needed. Acephate and pyrethroids (with bifenthrin the preferred pyrethroid) can be used for control of stink bugs. Since stink bugs are typically a late season pest, be aware of the pre-harvest interval of the insecticides you use.