Soybeans and Livestock- a Symbiosis in the Southeast 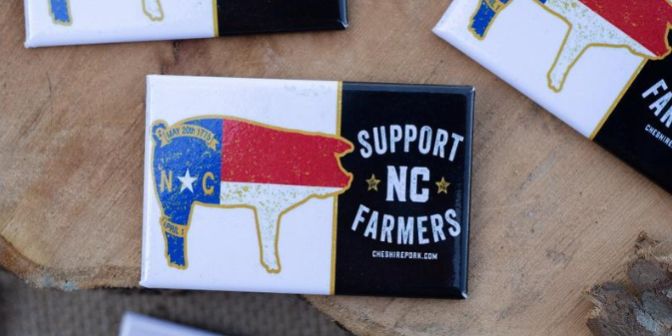 While the United States is the world’s largest soybean producer and second largest exporter, these national accolades oversimplify some important regional differences in terms of soybean balances and the factors dictating relative pricing.

Just to recap: the price premium/discount encountered across the US is driven by different things in different regions. In the Southeast it is tied to the local meal balance – itself a reflection of a state’s capacity to produce soybeans as well as local demand from the livestock sector.

The meal balance for all US states is illustrated in Diagram 2, below. The map shows the acute deficit of soymeal for the Southeastern part of the country as whole, as well as explicit 2017 meal balances for the individual southeastern states. In terms of meal deficit, at negative 1.6 Million tons, North Carolina falls somewhere in the middle of the pack with a smaller deficit than Georgia or Alabama, but larger than other neighboring states.

Diagram 3, meanwhile, plots this meal deficit, against the state-level price premium/discount relative to the US average for the 2017 marketing year and the relationship is clear: a larger local soymeal deficit tends to correlate with a larger premium. This deficit of course can be achieved in one of two ways; either decreased soybean production or through a larger local livestock sector.

Why a healthy premium is especially important to the North Carolina industry?

Due to small field sizes, higher labor costs, lower yields and higher fertilizer requirements, North Carolina is a higher-cost state in which to grow soybeans when expressed on a per-bushel basis. The cost of production challenge confronting North Carolina growers is illustrated in Diagram 4 which compares per-bushel production costs for the NC Coastal Plain, NC Tidewater and Iowa. For 2019/20, total per-bushel costs for Iowa soybeans (exclusive of opportunity costs of grower labor) are projected at $9 per bushel on rented land. Those same costs are projected at $9.40 and $10.20 per bushel for the North Carolina Tidewater and North Carolina Coastal Plain, respectively.

After seeing the higher costs confronting the state’s soybean growers the importance of the higher prices afforded by the presence of a large livestock sector in the state, comes into clearer focus. Diagram 5 illustrates that while North Carolina is higher-cost region than Iowa, North Carolina growers receive a price premium that goes much of the way towards making up the difference.

As we have laid out in this article, North Carolina is a higher cost state in which to grow soybeans, but higher prices afforded by strong local demand from the livestock sector keep the industry thriving. Unfortunately, the livestock sector in the state has been under pressure for quite some time. In the case of hogs, there has been a moratorium on the construction of new and expanded hog farms dating back to 1997.

Since then, hog production nationally has grown by 1/3rd but North Carolina has captured none of that growth – with production more or less stagnant since then. Iowa, by comparison, once had production comparable to that of North Carolina but now produces 25% more than the Tar Heel state. Soybean production in North Carolina, meanwhile, continues to advance on the back of ongoing efficiency gains and though an increasing amount is being consumed by the state’s growing poultry industry – that sector has been subjected to increased legislative pressure in recent years.

While soybeans are rarely the direct target of the legislative and ideological battles surrounding agriculture that are increasingly being fought in Raleigh, it is important to recognize that they are not immune to collateral damage. Soybeans and livestock represent a delicate symbiosis in the state and if soybean production is to thrive in the years ahead, a healthy livestock sector in North Carolina must remain part of the picture.