Have questions on what soybean population to plant this year, given the potential for poorer seed quality and lower germination percentage? The chart below shows plants per acre based on various potential germination rates. Dr. Dunphy, Extension Soybean Specialist at N.C. State University, considers 75,000, 90,000. or 100,000 an adequate stand for maintaining yield when planted in May, June, or July respectively. 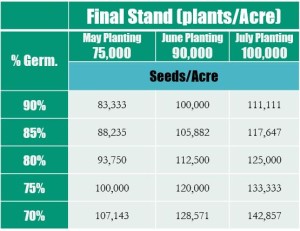 Recently, the NCSPA conducted a survey among growers about the impact of the tight seed supply on their variety selections. The survey asked farmers if it would impact the harvest of other crops if they cannot obtain seed for MG 6 or 7 soybeans in 2016 and they opt to plant an earlier maturity group (MG 5 or earlier).

The survey also asked farmers if they would prefer adjusting planting rates to planting an earlier maturity group if they were offered MG 6 or 7 soybeans AND the germination was specified at 65% to 70%.