Stem canker is a fungal disease that occurs sporadically from year to year in North Carolina. Infection is dependent on favorable weather conditions, specifically prolonged wet weather early in the season. Stem canker is caused by fungi in the genus Diaporthe. Infection by the fungus occurs early in the season, during the early vegetative stages of growth but typically, symptoms don’t appear until the plants begin pod fill. 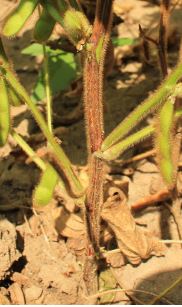 Symptoms of stem canker include lesions with reddish-brown spots that begin at the base of a branch or leaf petiole. As the lesions expand, they form slightly sunken cankers with reddish-brown margins. Interveinal yellowing and browning of leaves may be obvious and leaves will eventually die but remain attached to the petiole. If the stems are cut open, discoloration or browning near the lesion is common.  Diseased plants usually occur in patches within the field but may spread across an entire field in a worst case scenario, causing significant yield loss.

The fungi that cause stem canker survive in residue or in the soil for several years and this is the primary source of inoculum. During periods of wet weather, the fungus which has survived on residue, produces spores that can splash onto plant tissue and cause infection. Fields under minimum or no-till production are at a higher risk for stem canker development because of greater amounts of crop residue. Incorporation of the infested crop residue helps reduce the survival rate of the fungus and the potential for infection of the next soybean crop.

The most effective way to manage stem canker is to plant resistant soybean varieties. Seed dealers can provide information about the level of resistance in their varieties. In addition, Dr. Dunphy has a list of varieties with at least moderate resistance to stem canker here. If you happen to see stem canker on your farm, rotating to a nonhost crop (such as wheat, corn, tobacco, or cotton) is recommended. If an infestation is severe, avoid planting soybean again for at least two years. There is little evidence fungicides are an effective means of control, especially since infection occurs long before symptoms appear. 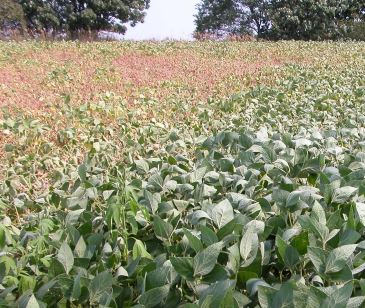 If you’d like to learn more about stem canker, Dr. Lindsey Theissen, NCSU Extension Pathologist, will be discussing the disease at a Soybean & Cotton Field Day in Halifax County on Wed, August 31. More information and registration can be found here and you can register here.