Time of Spraying and Herbicide Efficacy

When it comes to weed control, growers must use every tool in their toolbox to fight the battle. One of the often overlooked tools is ensuring maximum herbicide efficacy through time of spraying.

Over the last few years, a number of different research groups from universities across the Southeast have been looking at the impact application time of day has on the efficacy of post-emergence herbicides for Palmer amaranth control.

In work conducted by Dr. Alan York at NC State and colleagues in Georgia, Tennessee, & Louisiana, significant differences in efficacy of Liberty were observed based on the time of day of application. The graph below shows percent control of Liberty at various morning application periods. Based on their results, it is recommended Liberty be applied from 2 hours after sunrise through one hour before sunset for the control on Palmer amaranth. 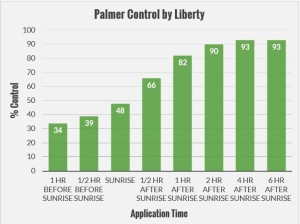 The graph below presented by Dr. Stanly Culpepper of UGA in a 2016 presentation on Cotton Weed Control demonstrates most herbicides perform at the maximum efficacy when applied in the middle of the day versus very early or very late.

While it is not completely understood why herbicides seem to perform better during the middle of the day, potential reasons include the presence of early morning dew which may cause herbicide spray to drip from leaves, different leaf orientation of targeted weeds at different times of day, differences in humidity and temperature, and specific weed physiological process that occur at night which may affect herbicide uptake.

Growers should be mindful of the effect time of applications have on herbicide efficacy. Maximizing the efficacy of herbicides is important to both your bottom line and to combating resistance.