Is Uniform Emergence Important in Soybeans

Planting season is a big deal for farmers. The decisions made here will determine the ultimate potential yield of your crop. As Dr. Heiniger says, “Planting day is the most important day of your season. It’s your super bowl. It’s the day you want to perform your best.”.

And for a few years now Dr. Heiniger has been sharing how important uniform emergence is for corn yield. The goal is to get all corn plants up within the first 24 hours as plants that emerge one or two days later have lower yields.

So is uniformity of emergence important for maximizing soybean yields? Well, we know that soybeans typically emerge over a period of several days, but little is known about whether the seedlings that emerge later are as productive as those that emerge the first day. To help begin to answer that question the North Carolina Soybean Producers Association funded a research project on seedling emergence.

To carry out this work, seedlings were flagged with which day they emerged over a 4-day period. Seed produced on individual plants was collected and weighed and that was converted to an estimated yield (assuming 135,000 plants/ac). We currently only have a limited data set with one location in 2016 and three locations in 2017, but the initial results from the project show that uniformity of emergence may be important for soybean yields as well as corn. 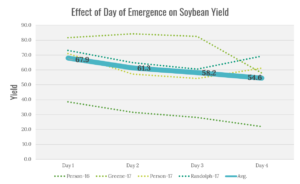 If this holds true as we continue to collect more data, then it looks like achieving uniform emergence in soybeans will be just as important as it is in corn. A 20% increase in yield would make a significant difference in soybean production and profit for NC growers.

So now the question is what can we do to help soybean seeds achieve uniform emergence? While planting into proper conditions is important, sometimes the weather forces us to plant when conditions aren’t perfect. Another thing you can do is make sure your planter is running at its best under the specific planting conditions. You should be constantly monitoring and adjusting your planter from day to day and field to field to make sure you are giving that seed as much potential for uniform emergence as possible. Some things to watch for include: