Whether you’re battling pigweed, horseweed, or ragweed, herbicide-resistant weeds have declared war on farmers in North Carolina and across the United States. With the number of species and types of chemistries with resistance continuing to grow, it will take all weapons available to defend our farms.

But replacing one herbicide chemistry with the next won’t win the resistance battle. For decades, farmers have used chemical control methods necessary for weed management. But one by one, weeds have developed resistance to a number of herbicide chemistries, eliminating them as viable control options for the future.

It is estimated that herbicide chemistries have about a seven-year lifespan if no resistance management efforts are made. This proves true in nearly every instance of pigweed resistance in soybeans in the Mid-South, which began in the 1980s when pigweed developed resistance to the popular herbicides Prowl® and Treflan™ (Group 3).

When ALS chemistry (Group 2) was introduced in the 1990s, there was an explosion of farmers using herbicides like Scepter® to control pigweed populations in Arkansas. But by ’97, places were already seeing fairly widespread resistance to this chemistry.

Next on the resistance cycle for pigweed was glyphosate (Group 9), commonly known as Roundup®. Roundup was introduced in 1974 as one of the first broad-spectrum systemic herbicides available for agricultural production. The Roundup Ready® trait was introduced in the late-1990s, increasing the post-emergence use of glyphosate in-season over tolerant crops until resistance began setting in around 2005. 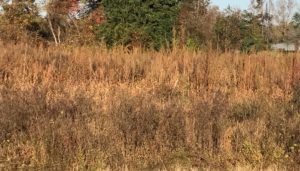 A soybean field overtaken by weeds.

And once glyphosate-resistant pigweed took over fields in the Mid-South, farmers turned to PPO herbicides (Group 14), like Flexstar® and Valor®, for control around 2010. Farmers have relied heavily on PPO chemistry to fix their weed problem and here we are in 2017, seeing instances of PPO resistance throughout the mid-south region.

With pigweed resistance confirmed at varying levels to herbicide groups 3, 2, 9 and 14, we now have very few chemical control options left for such a problematic weed.

Steps to Slow the Cycle

As new herbicide products like Engenia™, FeXapan™ and XtendiMax® become available, we have to rethink how to use these products so we can slow the resistance cycle.

We need to start thinking more long-term and stop making decisions on what will get us by this year but consider year-round weed-management programs. These programs may cost us more upfront but will help ensure the life of the chemistries we do have left.

A well-planned weed control program should include non-chemical practices like crop rotation, tillage, and harvest weed-seed destruction, coupled with herbicides. Focus on two key practices when it comes to herbicide applications:

Effective MOAs for pigweed-control are dwindling, and no new herbicide chemistries are set to hit the market for many years. For this reason, farmers must admit they have a resistance problem early and make the right decisions, for the right reasons, when it comes to managing herbicides. 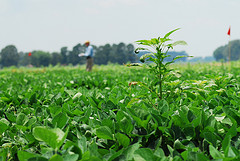