With over 75% of the soybean crop rated in good to excellent condition this year, we have a chance of seeing pretty respectable soybean yields across the state. Corn yields have also looked pretty good around the state thus far. How do these higher yields affect our soil nutrient levels?

Over the last 25 years, average soybean yields in the state have increased by over 10 bu/ac. That averages out to about a 1/3 bu/ac increase each year. As soybean yields continue to increase in the state, it is important growers adjust their fertilizer programs to account for these higher yields. 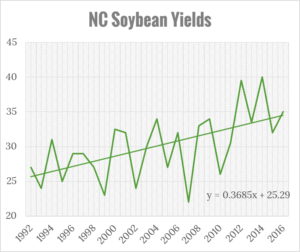 For a 50 bushel crop of soybeans, this means it would require a little over 100 lbs of monoammonium phosphate (MAP) and almost 300 lbs of potash (MOP) to replace the P and K removed from the soil. Failure to replenish nutrients removed by the harvested grain will likely cause soil test levels to decline over time. Fields with declining soil test levels may not be able to sustain yields, especially in years where conditions are right for above-average yields.

To determine the removal rates for your fields this season, this handy tool from cropnutrition.com. 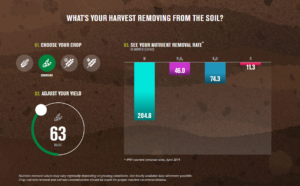 Note: removal rates in this tool are based on data released by the International Plant Nutrition Institute in 2014 and are slightly lower than the NCSU rates above.

While fertility is an important part of the yield equation, it’s essential to remember that it’s not the only factor limiting yield. Other factors such as weather, soil type, and variety play also important roles in determining yield. Management of soil fertility is part of the foundation for high yields, but it doesn’t guarantee them.

That’s why it’s important to treat each field on a case-by-case basis and use a combination of removal rates, soil test recommendations, and tissue testing to determine the most profitable nutrient strategy for each field.