2017 was an overall good year for soybeans across the state. Favorable weather throughout most of the growing season meant many of you saw yields higher than you have in quite a few years. We were excited to hear so many of you had a good year, it’s something everyone needed!

According to the NCDA’s latest estimates on January 12, the statewide average was 40 bushels/acre, up 5 bushels/acre from last year and tied with the 2014 record. Acreage was very similar to last year (1.69 million acres) but because of the high yields, total production was up 16% to 67.7 million bushels. 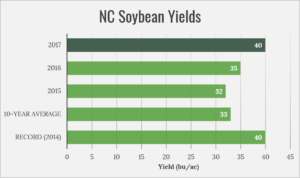 We saw high yields across the state from the Southern Piedmont to the Tidewater and we finally reached a milestone we have been waiting many, many years to achieve in North Carolina. The 100-bushel mark was reached and exceeded!

Two growers in the state submitted entries breaking 100 bushels, Mercer Farms in Pasquotank County at 100.2 bu/ac and Matthews Family Farms in Davie County at 107.4 bu/ac. In addition to these two impressive yields, the NC soybean yield record of 92 bu/ac was also broken one more time by Steve Meads in Pasquotank County with a yield of 97.7 bu/ac.

These three individuals along with all the yield contest winners were recognized at the NC Commodities Conference last week in Durham. The winners are listed in the table below. Each of the individual region winners was awarded a $50 prize by the North Carolina Soybean Association. The overall winner of the Yield Contest and the Most Efficient Production Contest will both be awarded an expense-paid trip to Commodity Classic in Anaheim, CA by the North Carolina Soybean Association.

A special prize was awarded this year. Over 12 years ago, the NC Soybean Producers Association announced that the first farmer to reach the highest yield of soybeans averaging 100 bushels or more would receive a prize of $2,500.  In addition, if the same farmer is a member of the NC Soy Alliance, an additional $2,500 would be awarded. We were excited to award a $5,000 check to Matthews Family Farms for having the highest yield above 100 bushels/acre. This award is a one-time only event, so this achievement will only be recognized this year. 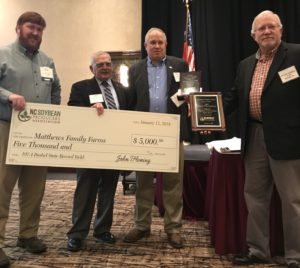 While weather played a large role in our high yields this year, there are also a few obvious trends among our top yielders that all growers may want to consider when trying to increase their own soybean yields.

Keep these points in mind as you plan for 2018. We’d love to see statewide yields in the 40’s again next year and want to see many more NC growers break 100 bushels!