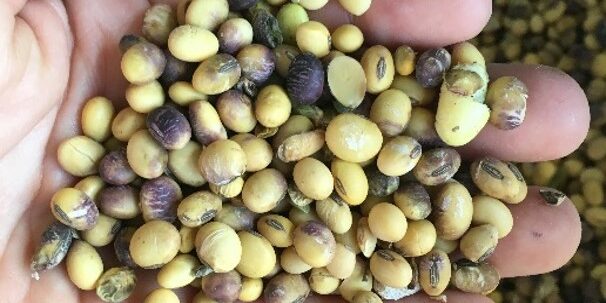 2020 was been challenging on all fronts, to say the least, and one of the challenges we faced this past year was poor seed quality in early planted/early maturity group beans. According to a survey conducted by Dr. Rachel Vann, there was anywhere from 5-30% damage seen in fields planted prior to mid-May.

One of the questions the NCSPA set out to answer this year is can a fungicide application help with seed quality. We covered some reasons why seed quality may be more of an issue for NC growers over the last few years in detail, in our post exploring the impact of harvest aids on seed quality. It’s worth a read before going any further if you haven’t seen it yet.  But in short, some of the reasons we’ve seen this change is due to a shift to planting earlier maturity groups and a shift to an earlier planting date among many growers, which results in those soybeans maturing under different conditions than what we’re traditionally used to in North Carolina.

To help answer the question “can fungicides be used to improve seed quality” we carried out work at four sites across the state, two in the Tidewater region and two and in the Coastal Plain region. Two different varieties were evaluated – a late group 3 that was Frogeye Leaf Spot (FLS) susceptible and a late group 3 that was FLS tolerant, with 4 different fungicide timings –R1 (beginning of flowering), R3 (beginning of pod development), R5 (beginning of seed fill), and R3+R5. An untreated control was also included for both varieties, which did not receive a fungicide application.

As we delve into the results, we’ll take a look at the individual effect of variety and fungicide timing as well as an interaction between the two.

Seed damage was evaluated using the same scale the NCDA would use to quantify damage. Each plot was rated for overall damage, as well as purple seed stain, as these are two different ratings based on the NCDA criteria. Both ratings are percent damage of a sample based on the total weight of the sample.

When we look at the effect of variety on seed damage, we see the FLS resistant variety had a significantly lower percent damage (as indicated by different letters) when compared to the susceptible variety. Looking at the effect of fungicide timing, we see no statistical differences in timing, but it is interesting both treatments with the late-season fungicide application (R5) had the lowest percent damage, numerically. These same trends hold when we look at the interaction between variety and fungicide timing as you can see the resistant variety has a lower percent damage than the susceptible variety for each of the fungicide applications, as well as the untreated control.

Based on this data, we can’t confidently say a late-season fungicide application will or will not help protect against seed damage, but it’s likely it does, although more evaluations are needed. However, this data does underscore the importance genetic resistance plays in combating disease, and the importance of selecting the right variety for your environment.

All plots were rated during the season for the presence of visible foliar diseases. These ratings were based on a scale of 1-10 with 1 having no visible damage and 10 having extensive visible damage. We saw no significant difference in the presence of foliar disease when comparing the FLS resistant and susceptible varieties, as the average disease rating for both varieties was just under two. When we look at the impact of the fungicide application, however, there was a significant difference for both treatments that included an R3 application compared to the control.

While visible disease ratings don’t tell the complete story and yield is an important component to the decision of whether to apply a fungicide, this data does suggest that an R3 fungicide application may be useful in minimizing the visible impact of foliar diseases, at the very least.

While the focus of this work was seed quality, yield is still an important factor for decision making and we wanted to evaluate treatments for yield as well. Despite significant differences in disease ratings compared to the untreated control, surprisingly, no significant differences in yield were present when it came to fungicide applications compared the untreated control.

But, there was a significant difference in yield when comparing the FLS resistant variety to the susceptible one. This trend was persistent across all fungicide applications, but not with the untreated control, which is interesting. We would have expected a fungicide application to have a greater impact on the yield of a susceptible variety, than a resistant one, but this was not the case in this evaluation. There is the possibility that the difference observed in yield between these varieties has nothing to do with the presence of foliar diseases but is just an inherent difference in the overall yield potential between the two. However, both varieties used were evaluated in the NC OVT in 2020 and the FLS susceptible variety actually yielded significantly higher than the FLS resistant variety, which is the opposite of what we see here. It’s possible the difference observed in yield between these two varieties is a result of the resistant variety being able to perform better in an environment with disease pressure, but more evaluations are needed to further validate this observation.

The final component we’ll look at is green material. Green material – the percent of stem/leaves that were still green just prior to harvest – is an important concern for harvest efficiency. Not surprisingly, there was a greater percentage of green material in all 4 of the fungicide treatments compared to the untreated control, with that percentage increasing the later the application was made. There were no significant differences in varieties, although, across all treatments, the FLS resistant variety had a little less green material, numerically, compared to the FLS susceptible variety. We know fungicides have the potential to increase green material/green stem and these results confirmed what we’ve seen in other trials.

In looking at all this data combined, we see that a late-season fungicide application (R5) may be useful for reducing damage, and particularly purple seed stain in soybeans. While a fungicide application did not impact yield in this study, it does highlight the importance of variety selection and the importance of selecting varieties with disease resistance packages, as the FLS resistant variety yield higher than the FLS susceptible line.

The issue of seed quality is complex and this data demonstrates there are many factors that contribute to increased damage/reduced seed quality. This work will be continued in 2021 to help shed more light on actions growers can take to improve their seed quality.