Be on the Lookout for Asiatic Soybean Rust

With Tropical Storm Hermine coming through North Carolina last weekend, Dr. Jim Dunphy warns there is a good chance of rust spores coming into North Carolina. As the storm crossed the Florida panhandle there is a chance it picked up and carried rust spores to our state as it passed through. In the next two to three weeks growers should be hyper vigilant about scouting for rust, especially in the late planted and later maturing beans.

Asiatic soybean rust causes superficial, tan to reddish-brown lesions that are most likely to be observed on the underside of leaves. The lesions contain rust pustules which are raised on the surface and may have an angular appearance. The pustules are very small (about the size of a pin head) so they are difficult to see without a hand lens. The disease is a concern because it has the potential to defoliate a crop fairly quickly, in just a few weeks. 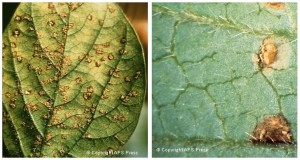 Most North Carolina growers probably aren’t very familiar with soybean rust since it’s typically not a problem in the state, but if you suspect  rust contact your county agent or consultant to confirm. If you do find rust in the next few weeks, the stage of your crop will largely influence treatment decisions. In fields with full sized beans in the top of the plant, it is probably not profitable to treat at all as these plants will be reaching maturity and dropping leaves on their own very shortly. In fields where the beans are not yet full size in the top of the plant, treatment is probably a good idea as the rust has the potential to defoliate the plant before it’s ready, resulting in yield loss.

If treatment is needed, consult the NC Ag Chem Manual to determine which fungicide is the best choice. Strobilurins (such as Quadris and Headline), Triazoles (such as Topguard, Caramba, and Domark) or combinations of the two (such as Quadris Top, or Stratego Yld) are all options. When choosing a product be sure to take into account the pre-harvest interval.

While Asiatic soybean rust has the potential to be a problem in North Carolina this year, there is no need to stress about future crops as the fungus cannot survive the winter here.