A recent study by the North Carolina Department of Agriculture and Consumer Services reveals soybean cyst nematode (SCN) is a significant issue for soybean growers in the eastern part of the state.

Soybean cyst nematodes develop very small (less than 1 mm) white cysts on the root system. These cysts reduce nitrogen-fixing nodules and increase the plant’s susceptibility to other pathogens. They also inhibit efficient nutrient and water use of infected plants. 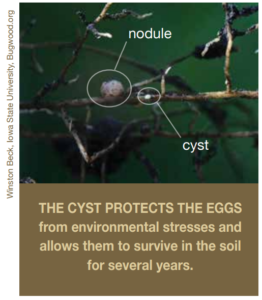 High population densities of SCN may cause noticeable symptoms such as severely stunted plants with chlorotic (yellow) leaves. More often though, few aboveground symptoms are observed. It is estimated this “invisible” pest contributes 10-20% yield loss in infected fields. 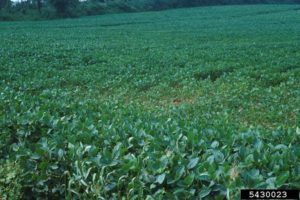 The survey conducted by Dr. Weimin Ye with NCDA&CS, looked at grower samples that were submitted to the Nematode Assay lab from 2014-2017 as well as samples that regional agronomists collected in the western part of the state. Over 100,000 samples were analyzed and it was found that SCN was present in 21% of the samples.

Johnston, Wayne, Nash, Wilson, and Pasquotank had the most SCN-positive samples while Montgomery, Bladen, Washington, Carteret, and Harnett had the highest population levels in the samples analyzed.

While it is important to know if SCN is present in your fields, knowing what races are in a field is also critical. There are resistant varieties, but resistance will only work for races for which the variety has resistance. Check back next week to see results from the race study and for recommendations for managing the pest.